The palace was built between 1898-1907 at the request of C.D. Mihail one of the richest men in Romania at that time. Most of his wealth was founded on grain exports throughout Europe, he is one of the largest holders of farmland in the country. The building was built by French architect Paul Gottereau which raised a number of buildings from the late nineteenth to early twentieth century most towns in southern Romania, being a period of time and the architect of the Royal House. Apart from Jean Mihail Palace, the most famous buildings built after his plans - Elisabeta Palace in Bucharest, the building C. et al The whole period of XIX century and beginning of sec. XX was an extraordinary period of development of urban construction in all major cities of the country, rising a number of valuable buildings and architectural sophistication.

At the time of completion of the construction of the Palace of Jean Michael, this building could be considered as a building ultra-modern for the time, she backed from the beginning by a central heating system with radiators using a fuel and fuel oil along the many stoves both fixed mobile and you could find in almost all the rooms of the palace. 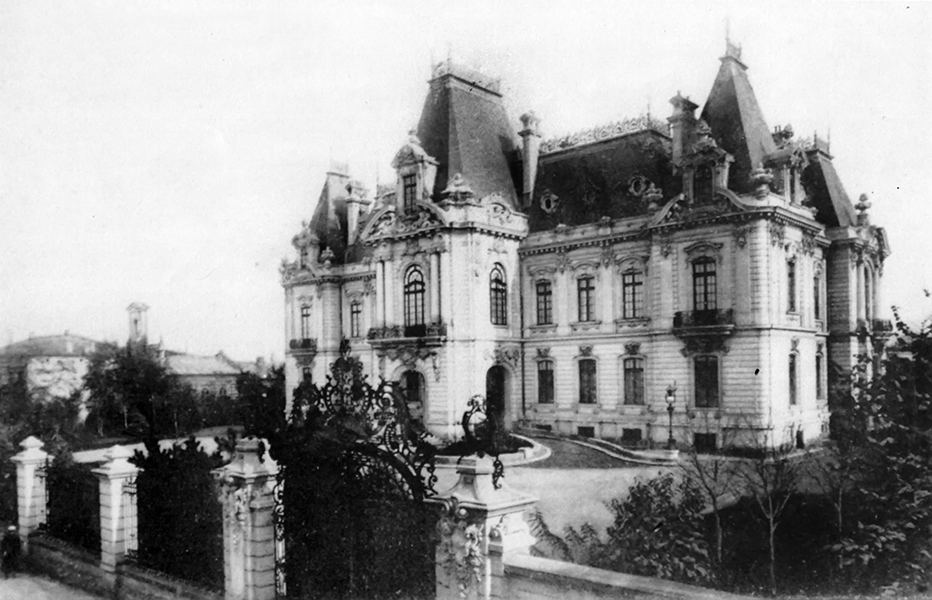 One of the wonders of technology at that time was considered the use of electric current lighting inside and outside, for example the first building known that benefit from power was the State Theatre in London in 1881, and the first city in Europe with electric lighting street was Timişoara in 1884.

The construction of the palace were used the best available materials and precious at the time, and a number of foreign craftsmen specializing in ornamental moldings and hardware. They were mainly Italians, being founded the first Italian community in the city of Craiova. For example the construction of the ladder interior using Carrara marble, which is one of the most popular types of marble (most of the works in marble made by Michelangelo were made with Carrara marble), all the interior we can see the chandeliers with ornaments made in crystal Murano Venetian mirrors and interior decoration mostly covered with gold leaf.

Because at that time electrical system was "primitive" and functioning electricity was totally different from the electrical system of today, the flow of electric current being always unstable and discontinuous, it was very important that any building "respectable" benefit as much natural light. For this reason the palace abounds with large architectural openings such as windows and two skylights important benefits also large, which allow natural light to enter all day in the middle of the building. 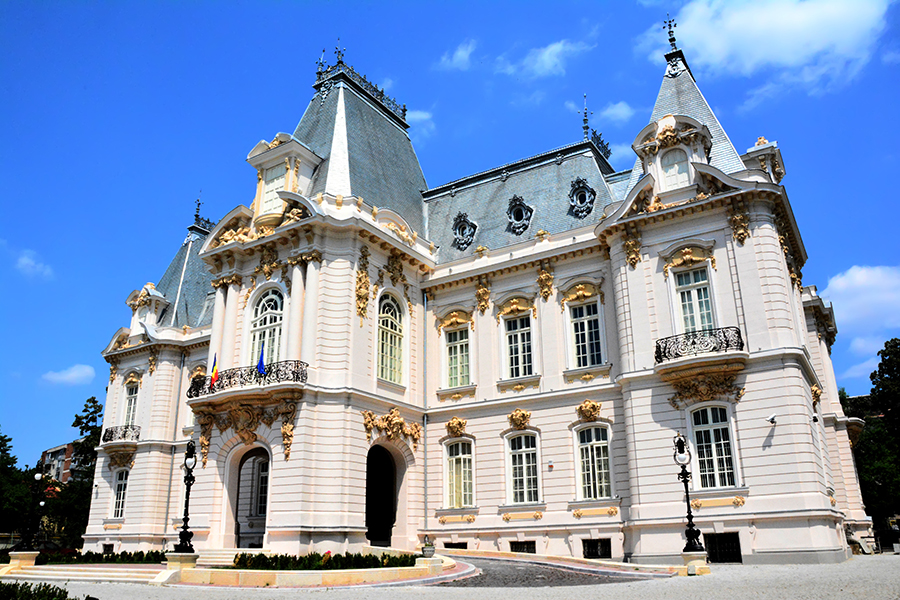 The architecturally eclectic palace is built mainly with Baroque decorative elements. The building has a main facade built almost perfectly symmetrical about the vertical axis with a porch centrally placed front access semicircular and two access side as a snail, and a secondary facade built symmetrically about a vertical axis with two roadways ladder that combines a central terrace also arranged.

Unfortunately C.D. Michael is very old and sick at the time of completion of construction did not get to do the official opening of the palace he passed away in 1908. The two sons Nicholas and Jean Michael had to make the official inauguration a year later in 1909 . After the death of their father, two sons divided the inherited wealth equally Nicholas eldest brother preferring to move to Paris where he had to waste all the belongings they say ala gambling, and younger brother, Jean Mihail have to live in this palace until death in 1936. Jean Lifetime Michael continued his father's business with grain and permanently increasing wealth, wealth that were added two legacies received from Dumba and Maria Elena Collon .

Jean Michael would die in 1936 and that was never married and had no offspring or other relatives decided to donate his entire fortune to the Romanian state through the establishment of the Foundation Jean Michael. This foundation aimed liquidation of the whole property and the monies have several key objectives including: the establishment of a faculty of medicine in the city of Craiova, building and equipping the next generation of a maternity all in Craiova, building small schools and hospitals Oltenia and sale of small plots of land peasants. 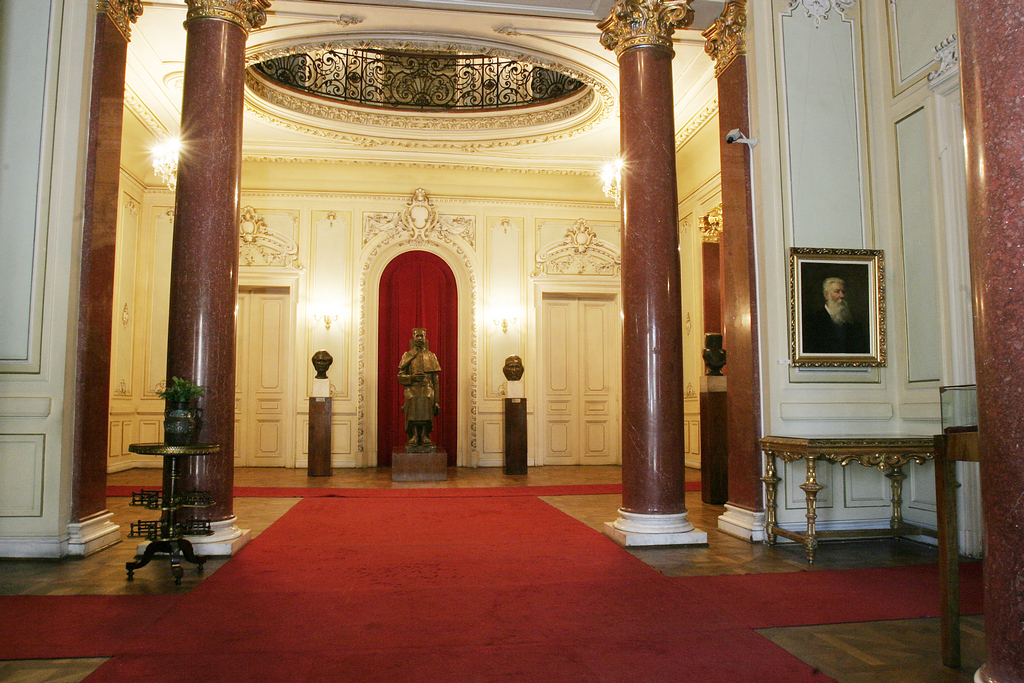 Over time until he founded Craiova Art Museum in 1954, the building happened a number of important events are worth noting: for a good time here was hosted Polish President Ignacz Mosciki with the whole Polish government to suite and also all lived in this palace for a long period Bios Joseph Tito, ordering the release of Belgrade's troops here as everything in this building will be signed and the peace treaty between Bulgaria and Yugoslavia. Here in 1940 was signed the Treaty of Craiova Romania that would give Bulgaria Quadrilateral.

During the Second World War, in the first part of the palace has housed the Central Command of the German troops in Romania and in the second part of the war after returning from the front to the west in this building was Headquarters General of the Army 34 Ukrainian front.

Since 1954 the building was to house the Art Museum of Craiova. 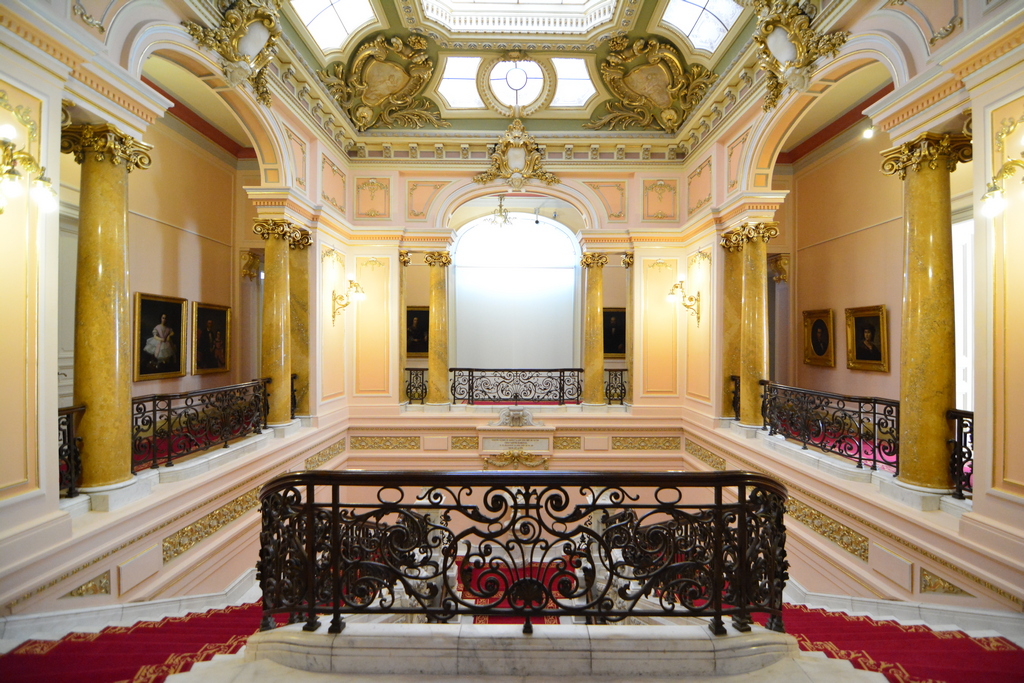 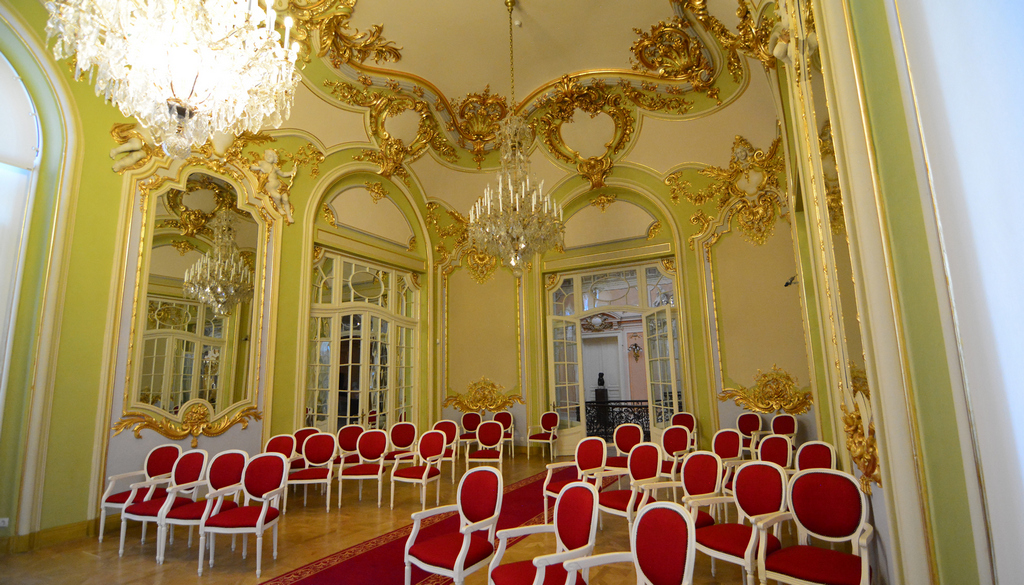